Sometime in the Spring of 2012 the musicians that would go on to form the Chicago & Minneapolis based trio ON AN ON found themselves at a tipping point. The three of them – Nate Eiesland, Alissa Ricci, and Ryne Estwing – had played music with one another in various capacities for the better part of a decade. Most recently, they had shared the stage and studio as three fifths of the indie-pop outfit Scattered Trees, which had seen its fair share of success. But with the band’s studio time only a few weeks away and the other members now spread out across the country pursuing other endeavors, they would chart their own course and come out stronger for it. What emerged was ON AN ON.

For ON AN ON, the precariousness of breaking new ground only three weeks before recording with accomplished producer Dave Newfeld (Broken Social Scene, Super Furry Animals, Los Campesinos!) provided a jolt of creative energy. The musicians had become disenchanted with their past approach to songwriting and recording, finding the process of striving for polished pop both tiresome and constrained. Newfeld proved the perfect counterpart to their initial vision for the record, encouraging them to push boundaries and go with their instincts.

According to Eiesland, the sessions were something of an exorcism: “We really wanted to get away from the sterility of our previous approach to recording.” Eieseland, Ricci, and Estwing embraced musical risks that in the past they might have shied away from. In the studio, the band members explored a natural chemistry and honed their sound; synthesizers, scattershot electro beats and ambient ear candy gave guitars, bass and drums a ghostly sheen.

While the melodies might clue one in to the trio’s evolved sonic palate, it’s through the album’s themes that the group members’ respective evolution becomes most apparent. Eiesland wrote the majority of the lyrics, in the process coming to terms with death and the traps that life springs upon us. Whether letting his intuition guide him on “I Wanted To Say More” (“You are a saint and you’re the devil / Every word I spoke to you, I thought that they were wings / But they were only feathers”) or owning up to life’s inevitability on “All The Horses” (“A family tree will split in two halfway through its life”), there’s a tempered calm to the thought-provoking imagery he espouses through his words. Estwing offered up his own lyrical seance on his lead vocal track “Cops,” although the bassist says his message – that the police can be surprisingly corrupt – is more direct.

After smashing everything they knew to pieces, they pulled themselves together around Give In, ON AN ON’s ten-track debut album – a dream-washed textural journey armed with a biting perspective on life, love, and the commonality of loss. It is an affair that sizzles with electricity and calls one in with its unnerved openness. 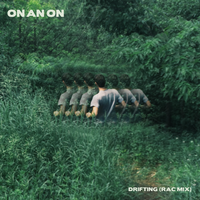 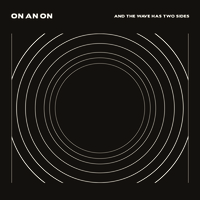 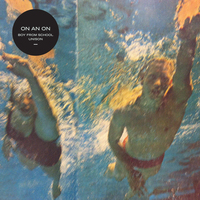 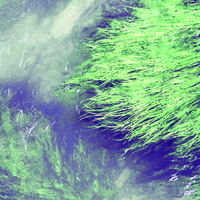